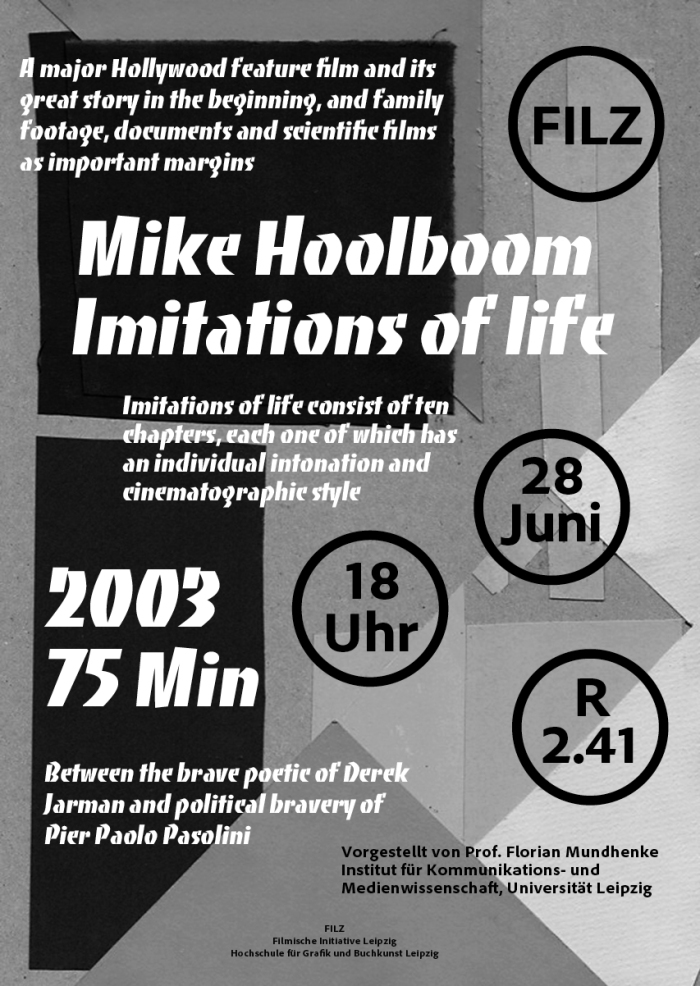 Regular readers ask about what writers about film I like. It isn’t any of those French guys; in fact my history starts with Harriot and goes through Wittgenstein, then to theorists in logical narrative. (No, not Peirce.)

Wittgenstein is a fascinating guy to study, in part because his ideas are clean, very clean. But more important was that over time he abandoned every one of them, replacing them with something more subtle, elegant and hard to reach. The ideas in „Tractus“ were his earliest and while some nice phrases can be extracted for posters, if they are worth reading at all, its worth reading the repudiation of them.

Still, anything that draws from even the first Wittgenstein trumps any silliness you will find in „What the bleep,“ „Tao of Steve,“ or „Waking Life.“

This is a very ambitious film. It has these components: text of Wittgenstein phrases from the Tractus and private statements about his own life and psyche, with that same text spoken in different time. It shows „found“ home movie segments (though some are apparently faked). These are silent of course but have some appropriate sound effects added. The era of the images varies quite a bit, most from the 50s it seems. Tractus is from about 1919. There is an effective score as well.

So we have several things in parallel, what I call „folded.“ We are given this man’s life. He was profoundly bipolar, what we now call bipolar and some of his philosophical (and architectural!) musings were specifically to counter suicide (like his brothers). We are given some very strong ideas from Tractus, which deals with the distance among the three concepts: „picture,“ „world,“ and „language.“ To use images from the world in apparently random ways (except the editing rhythm) and written and spoken language to illustrate these ideas is a brilliant notion.

I saw this together with „Cremaster 2“ and this for its flaws was vastly superior. It floats above meaning but has meaning. It shows something that must be incomprehensible but must also be. One registration: all the home movies are of Hungarians. Wittgenstein was Austrian; Vienna and Budapest were cities of the same empire until Tractus and afterward Hungary began a long slide toward internalism.

So forgive the filmmaker for not getting deeper into the ideas. What he’s done is good enough to be head and shoulders above other „idea“ movies.

led me to this great film

which is an absolute must see!

Vision and Communism: The Films of Aleksandr Medvedkin and Chris Marker at „The Film Studies Center, Chicago“ (Review Article)

Medvedkin and Marker met at the Leipzig Film Festival in 1967. Marker was drawn to the Russian director after he came across Medvedkin’s Happiness (Schast’e, 1934). Four years later, in 1971, Medvedkin came to Paris. He helped Marker and his collaborators organize a release of Happiness in France. Projections of the film were accompanied by Marker’s documentary The Train Rolls (Train en marche, 1971), which introduced Medvedkin’sHappiness, and also featured an interview with the Russian director. The Train Rolls begins with a montage sequence showing the impact of the Russian Revolution on film and other arts, after which Marker describes the organization of the film train and the crew’s activities in addressing social problems. The notion of film as fact, which is implicit in the notion that documentary filmmaking can provide proof of fact that will lead to social change, is emphasized by Marker’s direct, hand-held footage of Medvedkin (1). Marker’s film links the two men formally through choices that consciously acknowledge the filmmaking process and also intimately, on a personal and collaborative level. Unfortunately both The Train Rolls and The Last Bolshevik (Le Tombeau d’Alexandre, 1992), Marker’s ode to his departed friend, are noticeably absent from the Vision and Communism film series. While these films would have further informed viewers, their exclusion compels spectators to generate their own links between the films and filmmakers.

Classe de lutte (1968), the Medvedkin Group’s first collective film, after Marker’s „A bientot, j’espere“ which you can see below

Les Révoltés de la Rhodia”
On February 25, 1967, three thousand workers in Besançon occupied the Rhodiaceta textile factory owned by Rhône-Poulenc, then one of the largest French corporations, and declared a strike that lasted over a month.8 This was the first facto- ry occupation in France since 1936

Tracing the historical conjunctions and disjunctions that led to the genesis of the group, this essay will focus on the first two films produced through the common labor of those previously kept separate: À bientôt j’espère (1967–68), a documentary on the struggles at Rhodiaceta by Chris Marker, Mario Marret, and SLON; and Classe de lutte (1968), the Medvedkin Group’s first collective film. As a means of coming to terms with the specificity of the Medvedkin Group’s cinematic practice, this essay will end with a discussion of Jean-Luc Godard’s con- temporaneous work in the Groupe Dziga Vertov, with its parallel but ultimately irreconcilable claims for self-reflexivity, collectivity, and class consciousness.

In the recent Winter 2012 issue of October, Trevor Stark has published an impressive essay entitled “‘Cinema in the Hands of the People’”: Chris Marker, the Medvedkine Group, and the Potential of Militant Film.” Thankfully not put behind a pay wall, the article is available for download from mitpressjournals.org.

“Cinema in the Hands of the People”: Chris Marker, the Medvedkin Group, and the Potential of Militant Film*

below you can see
Happiness (Alexander Medvedkin, 1934)

In 1961, at a film festival in Brussels, Marker saw Medvedkin’s Happiness (Schastye; 1935), and described it as “a superb film as beautiful as Eisenstein’s, as popular as Mussorgsky’s music, deeply moving. . . . Where was the author? Dead? Alive?”

Cinema in the Hands of the People”: Chris Marker, the Medvedkin Group, and the Potential of Militant Film

In 1961, at a film festival in Brussels, Marker saw Medvedkin’s Happiness (Schastye; 1935), and described it as “a superb film as beautiful as Eisenstein’s, as popular as Mussorgsky’s music, deeply moving. . . . Where was the author? Dead? Alive?”30 Struck by this comedy on the difficult adjustment of an incompetent yet sympathetic peasant to his new life as a collective farmer, a film whose very emphasis on satire seemed to exceed the bounds of Socialist Realism, Marker searched mostly in vain for any information on Medvedkin. In his research, he eventually came across Kino: A History of the Russian and Soviet Film (1960) by Jay Leyda, an American filmmaker and historian who had studied with Eisenstein in the 1930s.31 Leyda’s book, in under two pages, provided one of the only English- language accounts of Medvedkin’s kino-poezd, or ciné-train, which consisted of three train carriages transformed into a film-production studio complete with projection room and living quarters.32 Leyda concisely describes the “several sided task” of Medvedkin’s “self-contained film studio” as they traveled the Soviet Union in 1932 under the orders of the Central Committee with the aim of making agitational films for and with local populations:

In addition to making instructional films to help local problems, for example, overcoming winter condi- tions to speed up freight shipments, the film crew was able to produce crit- ical films on local conditions (bureau- cracy, inefficiency, nepotism, etc.) that they or the local political workers judged to require their ungentle attention. The prime audience for these, as for the instructional films, was the local one, who would greet these barbed film vaudevilles with wel- come laughs and blushes.33

Zbig is a pioneer of the High Definition television technology, and an innovator and experimentator in the technical field. He holds several US patents, most of them for innovative ideas in film and video making, including the „Zbig“ software for matting.

Zbig also has a distinguished academic career. He has had teaching assignments as an instructor at the Lodz Film School, Poland (cinematography), at the Columbia University in New York (electronic filmmaking) and as a professor of experimental film at the Academy of Media Arts in Cologne, Germany. At the present time Zbig holds a position of a visiting professor at Joshibi University of Art and Design in Tokyo, Japan.

Currently Zbig is involved in the development of a new technology for live image compositing and he is pursuing his filmmaking career. Since December 2007, along with the renowned Israeli writer and journalist Eli Barbur, Zbig has been working on a two-hour film The Short History of White People (working title). The film portrays the fate of the Jewish people throughout the history of European civilization.

zur Ausstellung „The State of Image“: